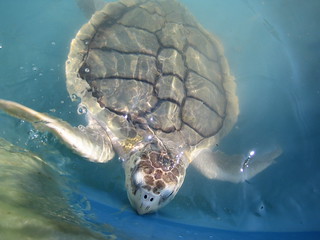 Sea turtle in water
14 years ago ago by saveloraturtles.

“Kemp’s ridley” is the American name for the species of sea turtle being protected by Fernando Manzano in Tecolutla, Veracruz, Mexico. The name “Kemp” comes from Richard Kemp, a Florida fisherman who discovered this species in 1880 and sent the specimen to Harvard University to be studied. In Mexico they call these turtles “Tortuga Lora”. Lepidochelys kempii is the scientific name. Listed as endangered under the U.S. Federal Endangered Species Act, and as Critically Endangered by the International Union for Conservation of Nature and Natural Resources, Kemp's ridley is the most endangered species of all sea turtles. 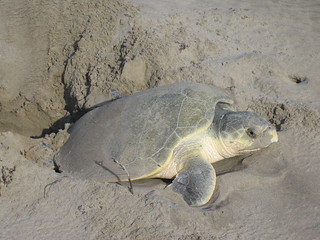 turtle laying eggs 001
14 years ago ago by saveloraturtles.

There are seven different species of sea turtles and Kemp's ridley is the smallest. The average adult weight is between 75 and 100 pounds, and their shells measure between 24 and 28 inches in length. Kemp's ridley shells (carapace) are grayish green and their skin color varies from green to yellow to white. Their undersides (plastron) are usually cream-colored or greenish yellow. Hatchlings are entirely black. The front flippers have one claw each, while rear flippers have either one or two claws. 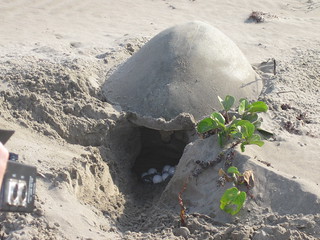 eggs being laid
14 years ago ago by saveloraturtles.

The Kemp's ridley is the only sea turtle that nests and lays its eggs during the daytime. High winds usually precede the return of female turtles to the same beaches where they were born. Once on shore, a female will crawl around as though she is looking for the “perfect spot” and then she will dig a nest into which she deposits 100 or so ping-pong ball size eggs. She covers them up with sand and heads back to the sea. Nesting usually occurs in arribadas, or groups of many turtles coming ashore on one stretch of beach together. Females will come ashore to nest two or three times per season. The season begins around the middle of April and lasts until July. Eggs incubate for approximately 50 - 60 days before the hatchlings work to let themselves out of their eggs. They cut open their leathery eggshells with a sharp point called a caruncle, which they have (only temporarily) on their snout. They then work as a group to dig themselves out of the sandy nest. 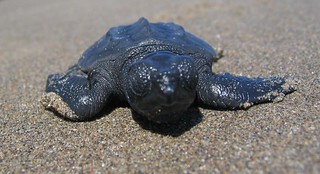 Much of Kemp's ridley nesting takes place on the beaches near Rancho Nuevo, Mexico, where in 1947 there were an estimated 40,000 Kemp's ridley sea turtles nesting in a single arribada. The population decreased dramatically over the next 40 years to only around 1000 adults in existence in 1987. Pollution in the gulf, commercial shrimping nets, destruction of their nesting areas and hunting of the turtles for their meat and shells all contributed to their decline. Protection efforts such as those by Vida Milenaria founder Fernando in Tecolutla and further north at Rancho Nuevo have brought about an increase in the population of the Kemp’s ridley turtles. In addition, new laws requiring commercial shrimping boats to use a special type of netting device called a turtle excluder have decreased the unnecessary deaths of many sea turtles that would otherwise have been caught in their nets. Continued work, both onshore and off, is needed to bring numbers up to true recovery.

There are many other organizations that are dedicated to preserving Kemp's ridley sea turtles as well as other endangered sea turtles. Please support them!